Over the past three seasons Pong has always strived to bring you timely, accurate reporting from some of the top competitors, crew members, and Officials in the country.  Rarely will we offer criticism of an Event, Official, or Venue, but when we do we aim to make it constructive.  It is important to note that we all come from different walks, backgrounds, and lifestyles and don't always share the same opinions.  That's ok, and we celebrate the fact that we are all different and can work together to improve ballooning.  With that said, we believe critiques are a healthy way of providing feedback to Events and potential participants.  Simply put, we wouldn't be providing accurate reporting and would be a disservice to the ballooning community if we embellished what went on at an event.

For the sake of disclosure we have provided (at his request) Maury Petrehn's email to Nick Donner and all competing pilots in the Monroe, WI event as well as communication to and from Nick Donner regarding his complaint on Task 7.

Post Race Drama - Around 12am on June 17th (early Sunday morning - the event ended Tuesday) the scores were republished with a correction to Task 7 that ultimately changed the winner of the race.  Maury gave an account of his reasoning on why the scores were changed via email to the participating pilots.  It should be noted that the lone score to change was Nick Donner's baggie on Task 7 dropping him out of the race lead.  Maury explains that while he was returning home from the event he reconsidered Nick's score based upon the baggie landing on the hood of a vehicle parked within the confines of the scoring area.  Maury was the Official that scored Nick's baggie Tuesday morning, the one that calculated the results, and the one that revised them nearly four days later -- only after BalloonPong editors posted their final review of the event.  Coincidence?  We'll let you decide.

Thank you for your consideration of my complaint to the scores. This being a mistake you are saying you became aware of just today (within the last 12 hours) I would have guessed that once the scores were recalculated there would be a time period available for complaints and protests especially since you were the person who originally scored my baggie at this target. I do believe that this would have been worthy of my peers hearing both of us out and taking a vote as your rules allowed.

I would also like to say that I tried to give you an entry fee but you refused to accept because I was going to get that money back even if I finished last place.

Nick,
You can also fly the BalloonPong banner for free in Monroe too - Now you have to come!

Thanks Maury. I will do my best but still won't know until Wednesday at the earliest. If it matters I am not off for Battle Creek even at this point for next month. The schedules sucked for June.

I would like to congratulate Scott, Rhett and Kinnie on a great race flown! 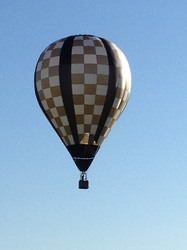 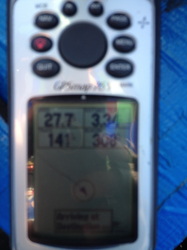 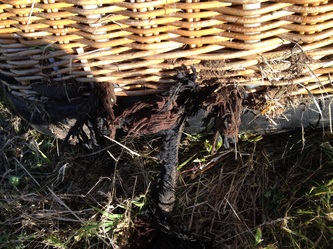 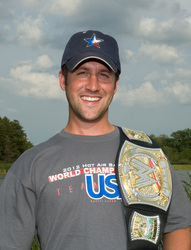 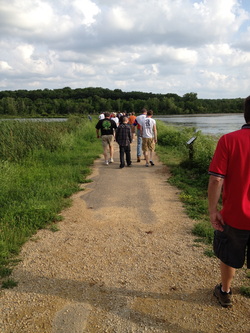 All of Monday's flying activities were cancelled. First on Monday morning the flight as cancelled due to a line of rain and thunderstorms moving into the area and then the evening flight was scrapped because of high winds again.

The picture to the left is the strip of land/walkway in the middle of a lake/pond on the west side of the competition map. The task, had the winds slowed down, was going to be to put a baggie anywhere on that strip of land. This was very ambitious because of the high winds, but would have been a fun challenge at any rate. I am sure that Maury would have received a few lost baggie tips from this task.

Tuesday morning marks the last flight attempt and currently there looks to be a slight chance that a flight will be called. The winds again need to be less than 10 kts and a short flight will be advised because of the impending winds speeds that are expected in the forecast as early as 8am. 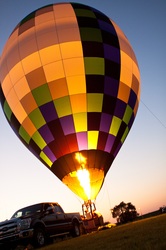 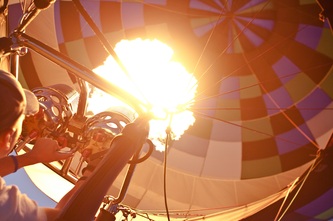 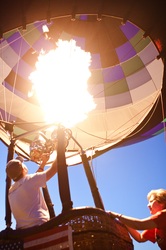 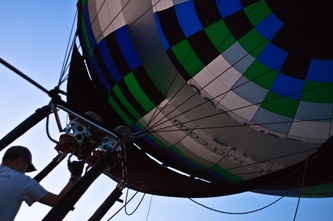 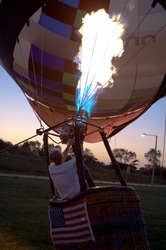 Update to follow early this afternoon. Three tasks from a common launch area and fairly windy on landing. All tasks were Judge Declared Goals and there were definitely good scores at every target.

Sunday morning competitors were greeted at the Blawkhawk Techical College with a 12 part task sheet and ten baggies. This took several people by surprise considering the winds at the time of briefing were over the waiver limited 10 kts for takeoff. However the tasks were called and pilots had to prepare for the flight and hope that the winds calmed down so they could actually get to fly the tasks or at least have a good dry run in the process. Event Director Maury Petrehn went through the tasks and a couple of questions were asked but an additional briefing was called where the first target was set to be placed about ten miles south of town in Illinois.

When competitors arrived to target 270 where the first fly-in target was to be placed it was still breezy but the airport winds were reports right at 10 kts. Rather than go with the original plan of 12 tasks Maury wisely decided that a competitive flight with the winds that were dealt would be better suited for three tasks and taking off at the field we were all standing in already. Task 2 was kept as task 1 and from there two additional Judge Declared Goals (JDG) were called. Task 2 was now at the soccer field/baseball field on the south side of town and Task 3 was a cul de sac surrounded by a cultivated field.

The inflation was quite windy but doable as all but three pilots flew. The first target was just 2.7 kilometers down and was an east/west road that you had to put the baggie on the road or in the 'short' grass for it to count. This meant you were going to have to throw from low altitude to get a score with the baggies. GPS scores would also be taken but a GPS score could not be achieved that beat any score of a baggie on the ground.

The next target was the soccer field. Winds were upwards of 56 kilometers an hour at 1200 feet and with competitors having to go up some to get the right turn this target also came up fast. The large field allowed for throws higher up and for competitors to not have to worry about being low for their drops. A good way to fly this was to fly at the target around 100 feet directly to the center and then account for the drift and put your baggie within the legs of the X.

The cul de sac target presented the biggest challenge of the morning as it took less than three minutes to get from the previous target to this one and you had to climb above 1000 feet to get the right turn and get in line for this X. One of the challenges this morning was coming down quick enough and soon enough to not get knocked off to the east on approach. The winds to the north on the surface were generally still there but you had to get settled in to them for your balloon to really get the left turn.

The last challenge of the morning was finding a suitable landing spot. The winds on the surface at landing time were in excess of 15 kilometers an hour and higher with the gusts. The nice thing about Wisconsin is that there are LOTS of places to land.....you just have to fly longer than you would plan to sometimes to find these landing spots. Plowed hay fields were the main pick for landing spots.


Scores are up here. The main difference from normal scoring that you see at other events is that the lowest score is best. The scores are broken down in the rule book within the same website where the event scores are posted. 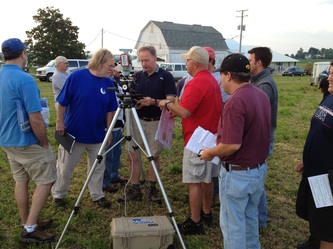 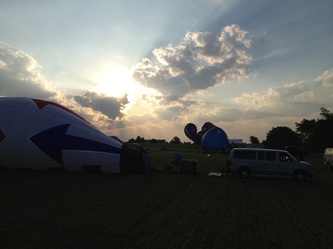 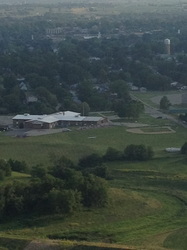 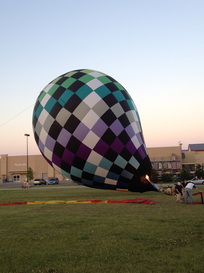 Saturday brought 10+ knot winds across the Monroe area during the afternoon that continued through the evening and prevented most of the pilots from glowing. About 10 balloons did put up though to bring awareness to the event. Tomorrow morning is shaping up to be the first competition flight of the event if the weather can hold out. Winds are currently 8 knots and forecasted to stay below that until after 8am. Then later in the day winds will be upwards of 20 knots with the gusts.

Event Director Maury Petrehn is planning a big first flight and with with the unique scoring system that has the guy in first with the fewest points pilots will try to finish up with less than 10 points to really think they have had a good morning especially with all the wind. We will try to break down the scoring system and talk about the tasks as time permits. 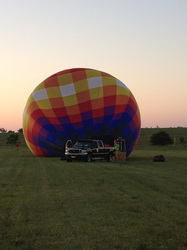 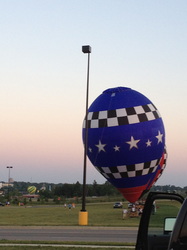 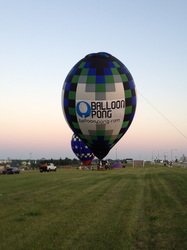 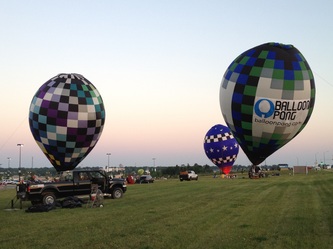 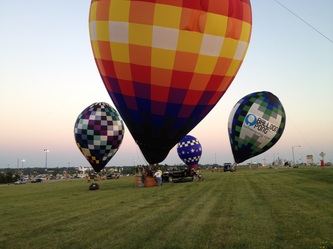 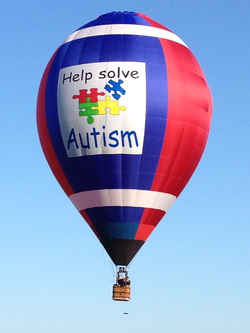 This weekend will mark the return of competition ballooning in Monroe, WI. Starting with an evening flight on Saturday June 9 and concluding with a morning flight on Tuesday June 12 competitors will fly as many as 11 tasks in a flight. Competition Director Maury Petrehn has his own set of rules that is published on his website www.open-championships.com.

Many competitors are looking forward to flying in arguably one of the pretties areas in the country with Wisconsin's rolling his and predictable steerage. On Saturday evening the event has glow preparations set up all around town in different locations. The wind seems to be the biggest factor in limiting the flying during the four days of the championship. Morning flights will have the best chance of getting in the air before the heat of the day kicks in.

The competitors list includes the highest amount of pilots from Team USA flying, six in total. John Petrehn will be the early favorite this weekend coming off a strong finish in South Carolina a couple weeks ago and winning the only event of this kind last year. Bill Baker having also flown in Maury's event last year and leading until the last flight will try to better his third place. Joe and Rhett Heartsill along with anyone with a TX driver's license will be a contender at some point and Nick Donner will try his best to win also.

These six pilot's from Team USA will also be flying for the rights to win the traveling Championship Belt that Joe Heartsill currently has for being the highest placing pilot amongst the team at an event that has two or more of them attending.

Look for videos and scoring updates son after flights and LOTS of tasks once the balloons take to the skies!