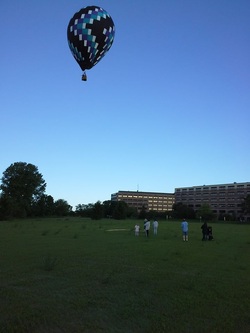 One of the big staples of the My Waterloo days event is the parade that marks the start of the weekend event. When pilots registered for the event it was obvious a Friday evening flight was not going to happen as winds were 14kts and were not forecast to drop until after midnight. Some of the pilots left the registration and went to the parade line up to let the town know that the balloons were back.

Saturday morning pilots awoke to 7kt winds and clear skies but a forecast showing that winds would be 11kts by 10:00. At the morning briefing Benji reminded pilots of the wet conditions and elected to call a one part fly in task to allow pilots plenty of time to find a landing spot before winds picked up.

Some of the pilots elected to sit the flight out due to the combination of waterlogged fields and the forecast of increasing winds. The pilots who chose to fly put on a very enjoyable show for the crowd on hand that had waited nearly 10 years to see the balloons return to the skies of Waterloo. The top 3 scores of the morning went to Bill Clemons, Al Appenzeller and Jon Shelton.

Saturday evening brought more showers and high winds. Some amusement was brought to the pilots when the Waterloo Fire Department showed up pulling a boat behind the fire engine. As the evening flight was cancelled the pilots took the opportunity to pose for a group picture in front of the rescue boat. After the group photo most of the pilots lined the street to allow the spectators that were there the opportunity to get pictures taken in the baskets and learn more about the balloons. Two pilots, Jeremy King and Laurie Allbaugh, then took their baskets to Expo Plaza downtown where they continued this public service at the festival center.

Sunday morning brought 16kt winds gusting to 22kts leading to the cancelling of the morning flight. At the awards banquet an emotional Clemons thanked everyone for going the extra mile to make the event a success despite the uncooperative weather. Fromm let the pilots know that plans were already in works to bring the balloons back in 2014 including doubling the number of balloons at the event. Final standings for the event were 1st Bill Clemons, 2nd Al Appenzeller, 3rd Jon Shelton and 4th Mike Hadley. 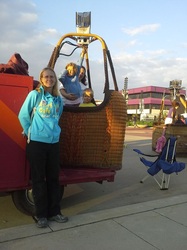 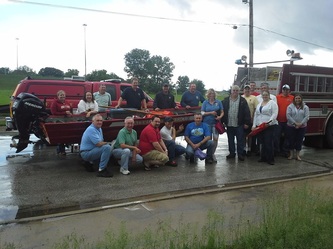 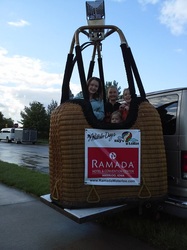 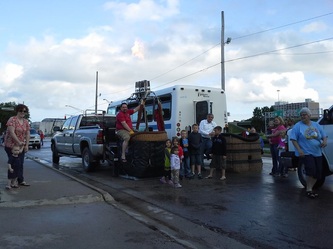 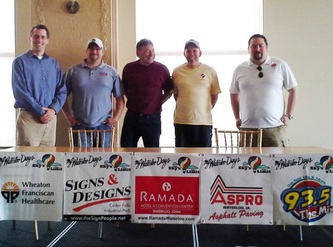