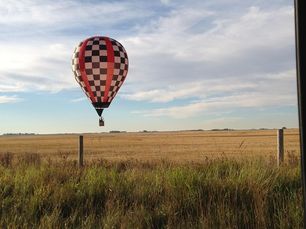 Canada’s (small) competitive balloon community will gather in High River, Alberta for the Heritage Inn Hotel’s 2013 Canadian Hot Air Balloon Championship between September 25 and 29th.  As well as being the qualifying event for the 2014 World Championships in Sao Carlo, Brazil, this is also a great opportunity to showcase a community that is coming out of the worst flooding in its history.

In June, much of Southern Alberta was pummelled with up to 200 mm of rain in a 24 h period and as it slid down the side of the Eastern Rockies, it gathered and quickly overgrew the riverbanks in communities along the way.  Few communities felt the water like High River.  Many people in the town of 15000 are still not living in their own homes and everyone was affected with many residents losing all their possessions.  It was uncertain whether the Canadian nationals could even proceed and the town had full reason to pull the plug on them.  But they didn’t.  This is as much a story of a town’s rebuilding and opening its arms as it is about balloons.

Fifteen pilots have registered to compete in what is becoming a biannual event.  Aside from reigning champion Jason Adams, all others are from the West meaning that the large balloon communities in Ontario and Quebec (even though they aren’t competitive) remain poorly represented.  Still, a good number of previous Canadian champions are in the field and the competition for Canada’s two spots at next year’s World Championships in Sao Carlo will be intense.

I expect Adams, son of one of Canada’s first competitors John Adams, to lead the pack as he did in Camrose in 2011.  Disappointed by his finish at last year’s Worlds in Michigan, he has worked tirelessly to sharpen his competition skills and has been throwing markers out across the Serengeti where he flies most of the year.   He won’t be alone at the top as I expect Dale Ritchie, David Gleed and Del Michaud will also have very competitive scores.  I’ve heard many people call Dale Ritchie Canada’s best ever flyer and his combination of international competitions and keen sense of timing somehow always has him hovering around the target.  Michaud and Gleed are also serious about competition and have honourably represented Canada on the international scene in the past.  Others, like Richard Clark, are just happy to see the target field. A new generation of pilots, featuring Cliff Skocdopole and Brant Leatherdale, means that the lessons Canada has been learning won’t be lost through time.

The event director is Gary Lockyer whose experience and preference for cutting-edge competition technology mean that competitors will be taking part in a truly world-class event.  Using SMS to transmit information to pilots should help lessen the learning curve for pilots who take part in international competitions.  This author will be reading the theodolite and is looking forward to the early wakeups.

An interesting part of Canada’s national championship – aside from the poor Eastern representation (it would be easier if it wasn’t so far; it’s over 3000 km drive from Ontario/Québec’s ballooning areas) – is that it is truly Canadian.  Whereas other national championships around the world occasionally feature pilots from other countries who want to practice, the Committee voted this year to only let Canadians in the competition department.  It appears as though a number of international pilots, from Europe in particular, would have been interested in participating.  Seeing as the timing of the event is favourable to pilots wanting to go to Albuquerque afterwards, letting them enter could be interesting in the future.

As mentioned, though, the real winners are the residents of High River.  Already, they should have their heads up high because of the courage and patience they have displayed since the floods.  For a few days in late September, they will be able to crane their necks even higher as they watch the colorful balloons above them and we get to admire the skill of many of Canada’s best pilots.  See you there!