After two tough years of bad weather, the preliminary forecast at the start of the second weekend in June presented the organizers, pilots and crews hope as high pressure began to dominate the area promising clear skies, good wind directions and no indication of storms.  22 pilots comprised the field this year which included last year's winner Jim Cusick, upcoming US Nationals Event Director Jim Birk as a competitor and of course, Askren Air.  Allen Yost returned once again to be the Event Director. The first flight of the weekend took place on Friday evening with the traditional Sponsor flight and Hog roast after.

Pilots and crews arrived at the Coshocton Fairgrounds Saturday morning to clear skies. However, mother nature can be quite misleading.  At around 1000 ft, pibal readings showed evidence of a low level jet with wind speed moving at 31 knots.  After putting the pilots and crews on a 45min hold, weather officer Maury Sullivan reported that the low level jet showed no signs of letting up, forcing Yost to cancel the second flight opportunity of the weekend.
To pass the time on Saturday, Event Organizer Patty Cramer invited pilots and crews to enjoy a relaxing Coshocton Canal boat ride.

Saturday evening Event Director Yost called a single MJDG with two target choices to choose from.  With unpredictable wind directions only three pilots managed to make drops on the targets.  Six pilots returned to the fairgrounds and glowed after the flight.

For the final flight of the weekend, Yost called for a two task flight, a fly-in task and a MJDG with two target options to choose from.  With SLOW wind directions varying from 198 to 240 degrees, it was clear that pilots would have lots of steering.  Many pilots admitted being a bit rusty on this flight as mistakes such as descending too soon, overestimating how strong the left on the deck was and bad throwing were to blame for some OK scores.  But in the end most pilots hit both targets and only one pilot remained consistent, 2012 Coshocton Champion Mike Emich.  Jim Birk took second and Tim Midura placed third. 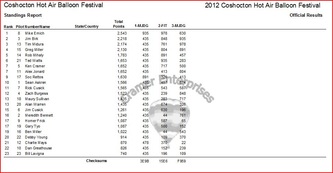 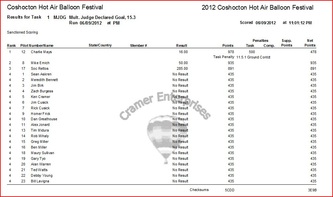 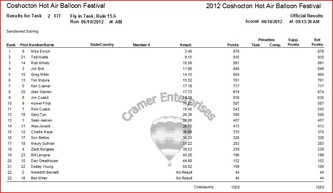 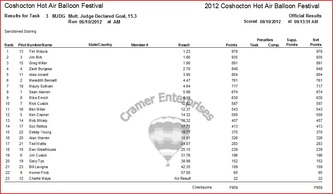 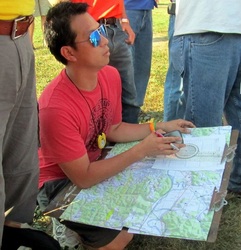 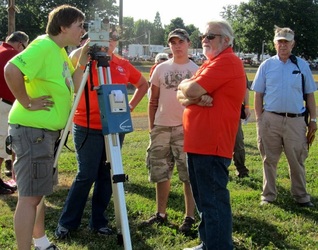 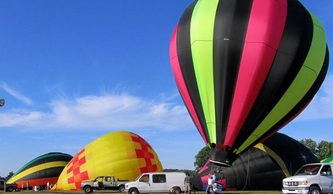 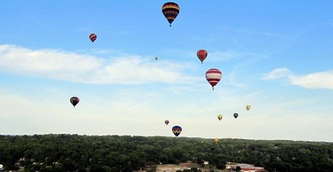 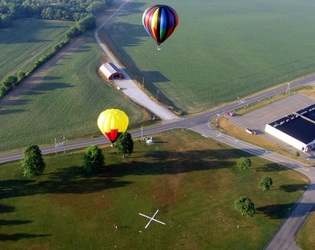 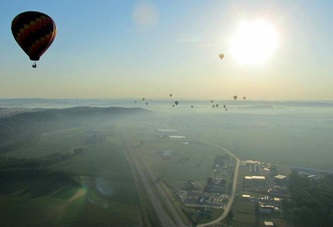