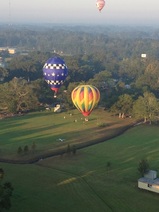 Friday morning 40 competitors from all over the United States flew in the first of three flights in a newly organized event in Baton Rouge, LA. With the new organizer came new dates and a slightly different location for the event. Now being officially held in Gonzales, LA about 20 miles east of Baton Rouge all flights are over the city and glows are done at the Lamar/Dixon center south of Interstate 10.

On tap Friday morning was a 2012 Buick for an actual key grab along with over $2000 dollars cash to be awarded to a total of 11 other competitors. Winds were very steerable and scores were close but the targets were spread out and if you went for the Buick it would be difficult to have close scores on the Xs with the cash. With that being said only a handful of pilots flew to the pole and all missed.

Following the main field targets was a Hare n' Hound that would fly just past Airline HWY and land. Finding a good field with lots of room for the balloons to maneuver allowed for the top three scores with money on them to be within eight inches.

On Saturday morning very light winds greeted pilots with a box at briefing time. Forecasts were for the winds to the north to become dominant and the south flow to disappear very shortly after sunrise. About 10 balloons launched to the south looking for north winds but those winds all but calmed out. Those balloons which included the new world champion, Nick Donner, did not get scores at the main field and lost the opportunity to win a 2012 bicentennial Louisiana shotgun and over $2000 in cash at the two targets. However most balloons w