We all woke excited with what lay ahead but soon disappointed to see that heavy fog had formed on sunrise. The breifing was delayed for an hour, then after everyone was moved to the Leszno Airfield. Here we waited, waited and waited until 9am when the ED cancelled the flight making Nicola Scaife the first Women's World Champion. 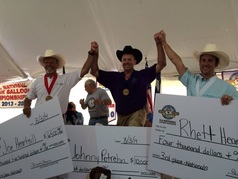 After days of rain and cancellations, the final day of competition dawned with yet another rain shower directly over the Gregg County airport.  Luckily, the single cell dissipated as pilots arrived for briefing and Event Director, Jim Birk, put the field on a 30 minute hold to wait for any visibility issues to develop, which did not.  At 6:30, pilots were released with a four part task, FIN, MDD, JDG, JDG.