Not to be confused with the African nation, or the prison in Louisiana, Angola, Indiana is a small town in the northeast corner of Indiana and it will host the inaugural Angola Balloons Aloft this weekend.  Event organizer Phil Clinger and his team, also organizers for the Findlay, OH event, do a great job in promoting events with specific focus on competition.  Locals are educated on competition flying through the event's website, news articles, and from the announcer at the field.  These events are great examples of how competition can really engage a local community which translates into more people through the gate.

Angola is just a short drive from last week's comp in Battle Creek, so we'll see a lot of familiar faces.  Pilots will be competing for over all cash money, and on Saturday morning a $1200 watch will be placed on the pole.  Competition starts Saturday morning so tune into Twitter for the live updates, and back here on the web after the flight.

Send us your pictures from the target!!  BalloonPong69@gmail.com 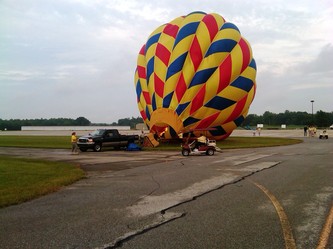 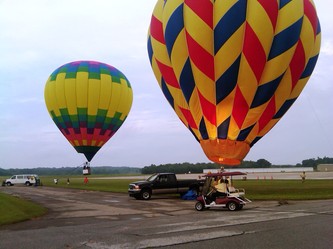 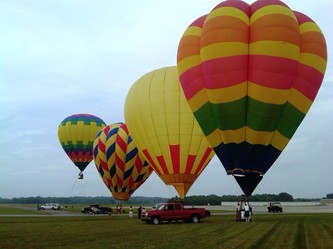 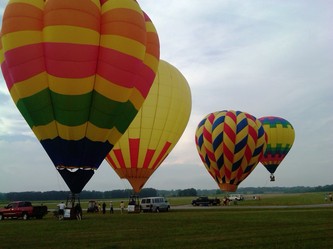 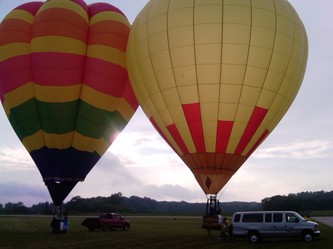 .
Friday Evening
Three Michigan pilots were the only to score during the first flight Friday evening of Angola Balloons Aloft.
Phil Clinger of Battle Creek scored first with a five foot drop at one of two targets. The fifteen pilots launched from the Tri-State Steuben County Municipal Airport west of Angola, Ind, in the northeast portion of the state and located just south of Coldwater,  Mich.
Paul Petrehn was second and Shawn Raya was third. All three flew to the same target.
Clinger, the event director, called a multiple judge declared goal, using the back yard of a house about 3 kilometers from the airport or an intersection about 5 1/2 kilometers away. Winds carried the balloons south of the airport.
Pilots were competing for a $100 restaurant gift certificate and Clinger announced because the winds did provide much steering, the evening flight would not be used to determine the overall champion.
The event is the first held in Angola since a six year span from 1975 to 1981. Clinger told pilots at the master briefing Friday afternoon that no prohibitive zones exist and that area residents have greeted organizers with enthusiasm.
After the flight, pilots returned to the airport for a balloon glow. A large crowd stretched up and down the flight line.
Flights are scheduled for Saturday morning and Saturday evening. 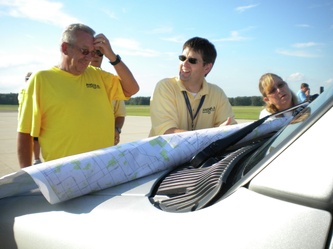 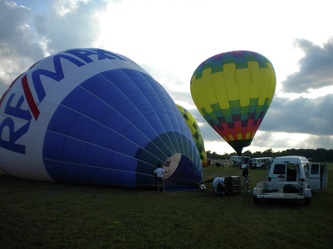 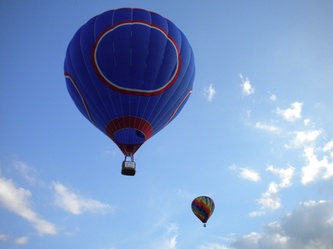 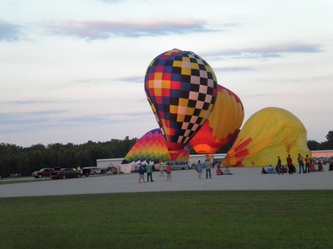 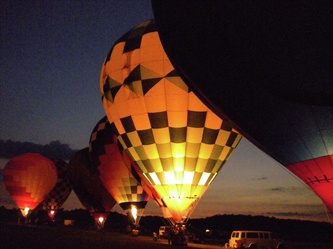 .
Saturday Morning
Pilots in Angola, Ind. flew a two-part task Saturday morning in mostly light winds.
With the sun just breaking in clear skies and over ground fog, Event Director Phil Clinger for Angola Balloons Aloft told the 15 pilots he was calling a minimum distance double drop on the field at the Tri-County Steuben County Municipal Airport and a multiple judge declared goal with two targets south of the field.
Pilots launched at least 3 kilometers north of the airport, several moving about as the winds seemed to change.
With little steer pilots were searching for a straight shot from their take-off to the airport.
At the field spectators watched as balloons climbed over a tree line on the north side and then dropped to only feet above the airport as they crept toward the targets.
Pink markers littered the field and the scoring team was working well after the pilots flew on.
A pole grab also was part of the flight with a hoop at the top and a $1,200 watch on the line but no one could reach the hoop. A good crowd watched from the downwind side of the target.
Scores were not available by late morning.
Balloons climbed from the airport looking for some right to reach one of the other two targets, one in a yard and a second in a cut hay field.
Generally winds were light although some pilots said they were finding some speed at 150 feet.
Pilots return for a 6 p.m. briefing for an evening flight. 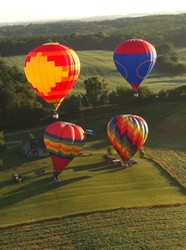 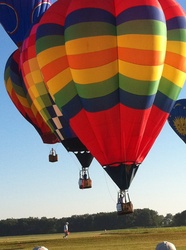 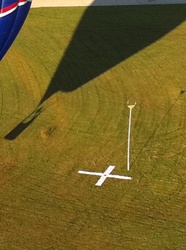 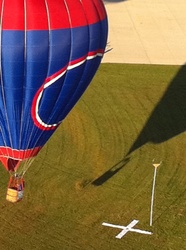 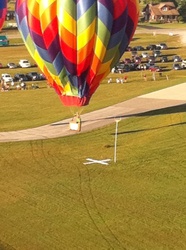 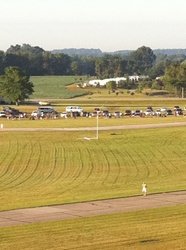 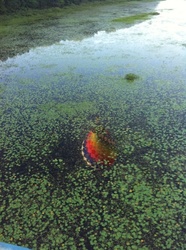 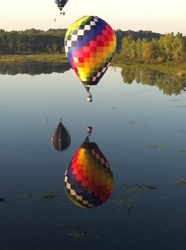 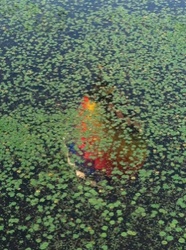 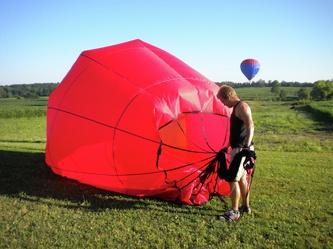 .
Saturday Evening
No flight for the overall competition Saturday night.
The threat of a thunderstorm forced Event Director Phil Clinger to delay the task until just after 7 when he told pilots they could launch from one end of the airport and attempt to grab a ring for a $1200 watch which had been on the line and missed Friday night.
Pilots waited until the launch window of 8:30 p.m., many moving several times after using pibals trying to figure the afternoon winds.
None of the pilots reached the ring and several who flew dragged their balloons from the scoring area to the glow field and participated in a second evening balloon glow.
And for the second night a good crowd lined the balloon field to enjoy a nice evening. 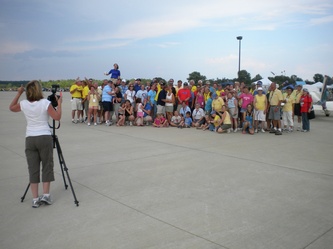 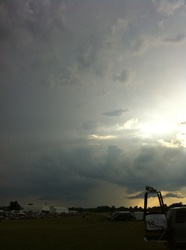 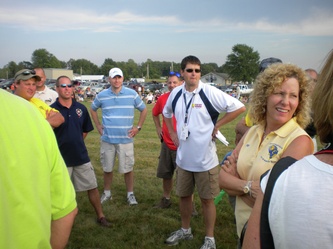 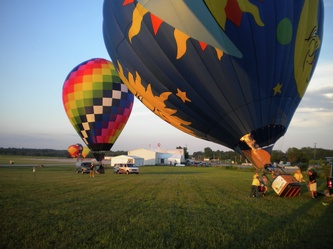 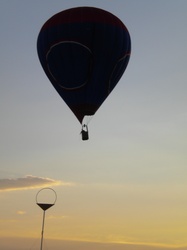 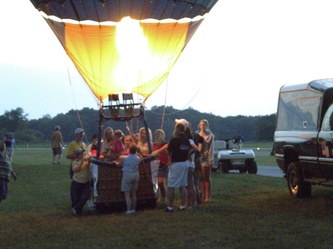 No flight Sunday morning meant that the event winner was decided from the Saturday morning flight.  Official scores are below along with pictures of your winners.  Congrats to Jeff Pestun on his second win of the season! 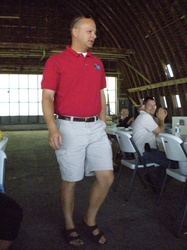 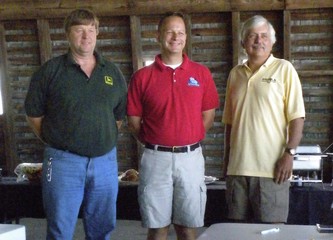