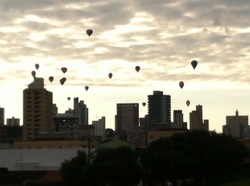 The following is compiled from a series of updates sent to us by Deputy Director David Levin.


Task Sheets, Maps, Goal Lists, and Scores can be found on the Official Event Website:  www.brazilhab2013.com.

The competition started with a three part morning flight on July 22, 2013.  The wind shifted during the flight which caused all of the balloons to miss the three MMAs (Marker Measuring Area) but CIA (Balloonin Subcommittee of the FAI) logger scoring kept the pilots working until the end of the flight.  Uwe Schneider said that the fourth task was the most difficult.  When asked what he meant by the fourth task, he said "finding a place to land".  This is a difficult flying area.


The second flight of the competition was a two part afternoon task on July 22, 2013.  The afternoon tasks were a Fly In and Fly On with some excellent drops on the Fly In.  Odin Aragon of Mexico won the task with a beautiful approach and a 1.26m drop.  Close behind was Uwe Schneider with a 2.27m drop.  There were six drops within the legs of the X on a difficult windy flight.

Inclement weather caused the cancellation of both flight opportunities on July 23, 2013 as well as the morning flight window on July 24th.

A two part evening task  (3DT and FON) was called on July 24, 2013.  After three flight cancellations we finally got a flight off this afternoon although in light rain.  It seems the Brazilians are happy to fly in wet conditions after three cancellations.  Unfortunately there was yet another wind shift before the launch making the tasks quite difficult.

After another cancellation of the morning flight window on July 25, 2013.  Event Director Mathijs deBruijn called a three part task that evening.  Tasks 8, 9, and 10 were FIN, JDG, and FON.  This was the final flight of the competition - seemingly due to weather cancellations on July 26 and 27.


The good news is that we are learning a lot about the flying area and problems associated with the location.  We have already had one event debriefing and we continue to make improvements.  The other good news is that this is not the Worlds.  The weather is really quite poor.  I'm told it only rains like this one year in ten.  I guess that means we can expect better conditions next year for the Worlds.


Final standings can be seen here.  Congrats to Odin Aragon of Mexico battling through the tough weather and claiming the victory!!