Friday did not continue the trend.  Variable winds existed from sunrise on.  We identified a general slow flow from the northeast to the southwest which brought into play geography logistics that complicated the problem.  To the north of Balloon Fiesta Park lay the Sandia Pueblo Indian Reservation – a no launch area.  This sent a lot of pilots to the west, counting on a high easterly flow to ride to the target.  Our strategy was to find a launch site along the river to the north that would allow us to fly the middle layer winds into the target. 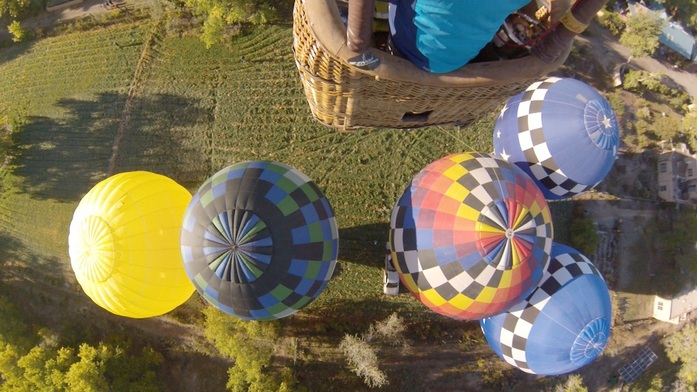 Myself, Nick Donner, Joe and Rhett Heartsill, and Steve Jones decided on a small horse pasture just west of the river on roughly a 165 degree bearing to the target.  Winds below the trees along the river had actually started to flow to the north (away from the target) by the time we lifted off.  Not a good sign.  We knew we were in for a long morning.

We found our track at about 1000ft…heading right for the target, but very very slow.  At about 2mi out we were looking at a good hour and a half flight.  A long time to hold a wind on a variable day.  I figured we had about a 30% chance of the winds holding long enough to make Balloon Fiesta Park, and even less chance of actually getting a score.  Even with the bad odds we felt our strategy bested most of the other pilots in the air, so we had that going for us. 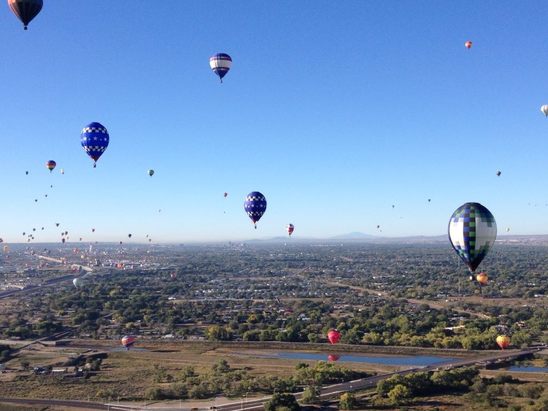 The wind direction we needed existed in a very small band right around 1000ft.  A small distraction could find you 100ft to low and heading way off course requiring vigilance in altitude and heading for the entire duration.  Halfway through our flight to the target the first balloons started reaching the target area, giving us crucial info on the direction of the surface winds.  The first pilots appeared to be coming in slightly from the southwest.  From where we were approaching, our strategy would be to pass the target at our altitude and then descend to catch the wind on the surface to get back to the target. 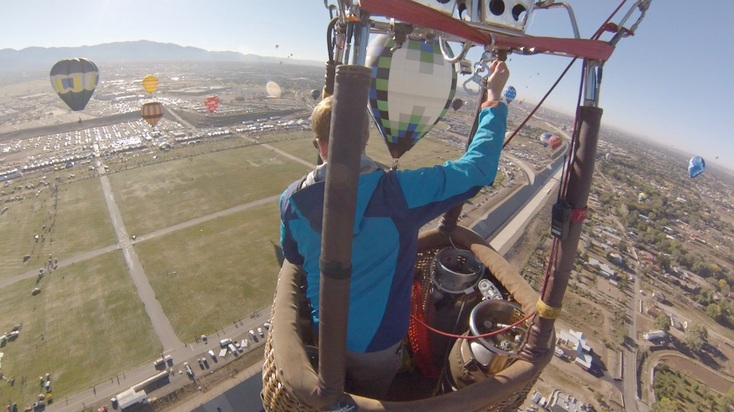 The narrow band of wind surprised us all and carried us to the target.  Now the challenge is calculating and executing the transition to the lower winds correctly to take us to the target.  The task on this day was a Minimum Distance Double Drop (MNDD), meaning you had to get two markers in opposite triangles with the goal of least distance between your markers.  Scoring areas are small so added importance is placed on a low pass for a more accurate throw.

There had been a lull in balloons at the target meaning we were blind on surface winds.  Still planning on it being form the southwest we were west and high of the target.  Light winds make it harder to notice any changes in direction because the visual clues are so subtle:  A flag turns slightly on a pole, smoke leans slightly right instead of slightly left.  Is this just a temporary change or a more permanent shift?  These are the thoughts running through my head as I study the picture outside the basket.  I notice balloons behind and too my east on the surface have stopped.  These balloons already crossed the target from the southwest, have now stalled out, and almost appear to be tracking back toward the target.  Agonizing moments pass as I’m still tracking south clicking off precious meters as I slowly come abeam to the targets.  If there is a change in the wind I need to start a correction maneuver now! 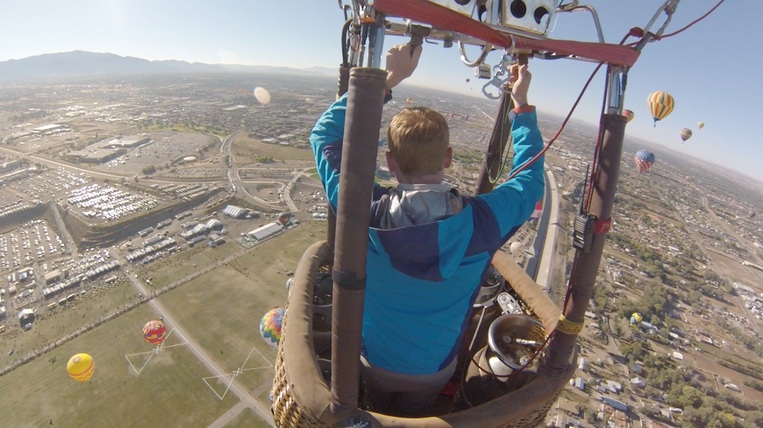 Searching for the higher east wind.
Then I see it.  The wind has indeed shifted almost 180 degrees and is now flowing from the north.  Nick and I are close enough at this point that I yell to him, “I think we need to come at this from the North!”  My only option is to climb in search for the high altitude easterly wind to take me toward the target.    I catch it…ride it for a few moments and then descend, hoping I’ve done enough to be able to attempt a throw.

About halfway down I feel like I’m right over the X.  A couple lucky throws away from a score.  I debate with myself whether to throw the markers or not.  From this altitude it would be like making a half-court basketball shot….twice.  But I feel the balloon sliding slightly to the south and am not sure I'll even have a chance at throwing once on the deck.

I just can't take the chance and hold the markers hoping I'll be able to make a throw at a lower altitude.
Agony

Ah, but alas.  My descent takes me just south of the target….out of throwing range.  Joe Heartsill, Maury Petrehn, and I bounce around each other for a few minutes hoping the wind will shift back from the south and take us to the targets, but it never comes and we’re slowly shuffled off the playing surface to the south.

All pilots above me in the overall ranking also blanked on this task, making the situation harder to swallow.  Had I scored…I would have won the event and the $10,000 prize.  All I needed was maybe three minutes more notice on the wind change to start my correction maneuver and I may have had a shot at a throw, but so it goes in ballooning.  No complaints and no do-overs when riding the winds.